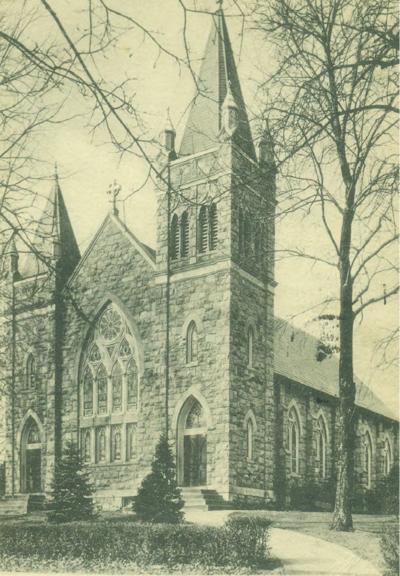 Father Tearney and the People Build a New Church

SITE:  Near the railroad depot in the West End of Falls Church on part of the old Sherwood tract. Though the railroad no longer exists, the church still stands on the same site.

DESIGN:  Designed by parishioner A.O. VonHerbulis,* “an architect of some note who lived near the church.” The VonHerbulis family lived at the site of St. Joseph Preschool. He is buried in St. James Cemetery.

BUILDER:  Thomas Hillier. At the time it was constructed, the church was called the “best example of Gothic architecture in the state.” The native sandstone of the exterior was quarried in the village.

COST:  According to a Washington Post story on the dedication of the church, the entire cost was donated by Mrs. Thomas Fortune Ryan, wife of a New York millionaire financier. The Ryans financed many Catholic projects on the East Coast.

EARLY EVANGELIZATION:  The story is from the recollections of early parishioner Eugene Shreve:
(1899-1990), who was in the initial first grade class in St. James School. “Father belonged to the M. E. Church [Methodist], South, and our Mother was a member of St. James Catholic Church.  When the latter parish undertook the building of a new church in 1902, Father volunteered his services and a team of horses to help the men of the congregation in the project. By manpower and horsepower they excavated the site for the stone church. … He became acquainted with Fr. Frederick Lackey who was Assistant Pastor of St. James at that time, and a lasting friendship developed. After thoughtful deliberation, (Father) was instructed in the Catholic faith and converted.” 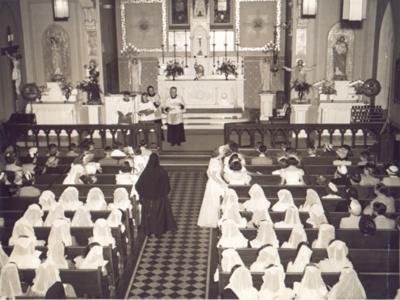 *A. O. VonHerbulis, known to his friends as “Otts,” had one of the first television sets in the neighborhood. A former parishioner remembers being invited as a child to watch a football game at the VonHerbulis home.

Middle right: The originial stone church built in 1902 - the front of the church had an entrance on each side.

Bottom Right: The interior of the new church. As you can see, the original stone church consisted of only the nave, the main body of the church. Many students from 1952 -1970’s will remember the large crucifix hanging in the school. First Communion Photo, c.1945.