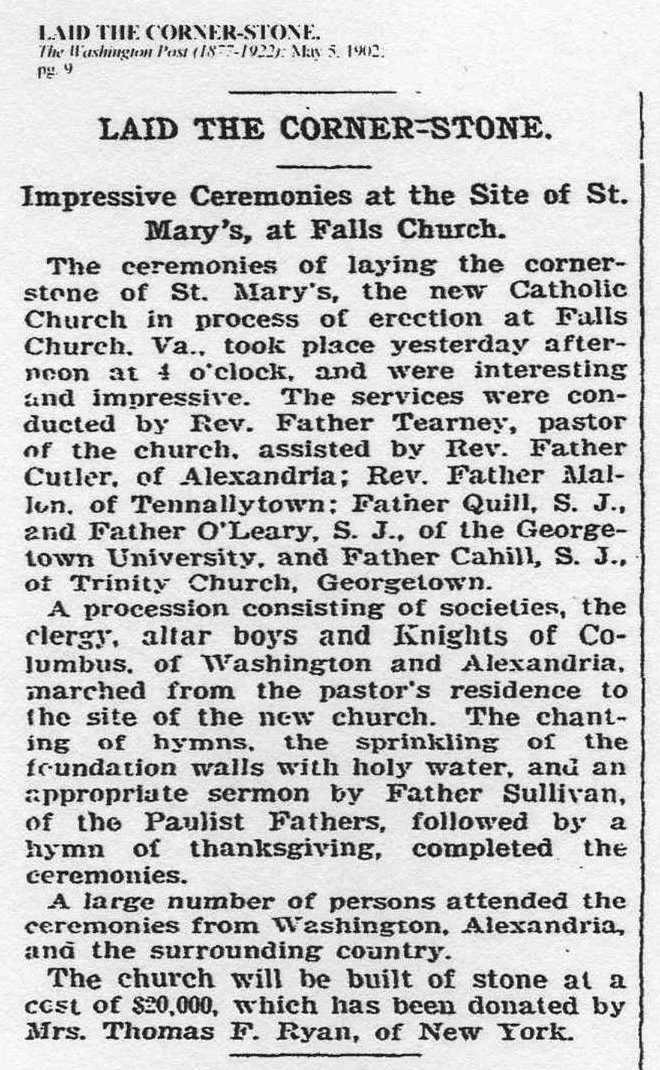 The Washington Post sent reporters to cover both the laying of the cornerstone and the dedication of the new stone church of St. James. They published the wrong name in the cornerstone story, probably because the original community had been a mission of St. Mary’s in Alexandria. “Tennallytown” is now known as Tenleytown, a neighborhood in Washington, DC.

Read the article as it appeared in The Washington Post, on May 5, 1902

Impressive Ceremonies at the Site of
St.Mary’s, at Falls Church.

The ceremonies of laying the corner-stone of St. Mary’s, the new Catholic Church in process of erection at Falls Church, Va., took place yesterday afternoon at 4 o’clock, and were interesting and impressive.  The services were conducted by Rev. Father Tearney, pastor of the church, assisted by Rev. Father Cutler, of Alexandria; Rev. Father Mallon of Tennallytown; Father Quill, S.J., and Father O’Leary, S.J., of the Georgetown University, and Father Cahill, S.J., of Trinity Church, Georgetown.

A procession consisting of societies, the clergy, altar boys and Knights of Columbus, of Washington and Alexandria, marched from the pastor’s residence to the site of the new church.  The chanting of hymns, the sprinkling of the foundation walls with holy water, and an appropriate sermon by Father Sullivan, of the Paulist Fathers, followed by a hymn of thanksgiving, completed the ceremonies.

A large number of persons attended the ceremonies from Washington, Alexandria, and the surrounding country.

We have several cornerstones on our campus - check them out in this article...