In 1892, the small mission of St. James received formal recognition as a parish. At the time of its establishment, St. James was the only Catholic Church between St. Mary’s in Alexandria and St. Peter’s in Harper’s Ferry.

Initially, a visiting priest from St. Mary’s journeyed from Alexandria to celebrate Mass here every Sunday in the frame chapel built about one-half mile from the railroad station.  Shortly after this construction, Rev. Edward M. Tierney arrived to serve as the first pastor of St. James.

Under Father Tierney the parish received a firm foundation.  In 1902, the original stone church was built at the present location at the intersection of Park Avenue and Spring Street.

Things progressed quickly and in 1906 the first elementary parochial school was erected.  The following year, the Convent and chapel were built on Spring Street for the Sisters of Perpetual Adoration from New Orleans who had come to administer the school. In 1910 Rev. Amadeus Joseph Van Ingelgem -- known as Fr. Van -- arrived in the parish after Fr. Tierney's retirement. Fr. Van nurtured the parish flock and made improvements to the grounds around the parish and school as well as at the cemetery.

In 1923, the Sisters were called to other duties and it was the Sisters, Servants of the Immaculate Heart of Mary (IHMs) who then began a long and fruitful relationship with our parish.  For more than 80 years they have ministered and educated thousands of children.

In June, 1931, Father Edward V. Mullarkey, a native of Ireland, was appointed Pastor of St. James.  Faced with a rapidly growing population, Father Mullarkey was tasked with accommodating a greater number of children at the school.  Despite construction problems common to the war years, the parish was able to build two new classrooms. A year later, two more rooms were added and finally, in 1948, an entirely new structure was completed, housing ten classrooms, a library a cafeteria and an auditorium.  In 1950, more land was purchased and a new wing was built.

Our parish was growing. By 1950, the number of Sunday Masses had risen to six, with the church structure so overcrowded that at times it constituted a safety hazard. To address the problem, it was decided to convert the school auditorium, temporarily, to a chapel on Sundays. Father Mullarkey was influential in the expansion of the original stone church which was completed in 1952.

Msgr. Paul V. Heller followed as pastor – a post he held for twenty-five years.  Beloved for his kindness and steadfast dedication to St. James, Msgr. Heller continued the work of his predecessors.  Each successive pastor has, in his own way, brought perspective and vision to our parish.  Father Patrick Posey, pastor from 2006 to 2019,  reinvigorated our evangelization efforts, established Finance Councils for both the Parish and School, and spearheaded a capital campaign addressing our most pressing needs as well as supporting a diverse faith community.

On June 27, 2019, Father Paul D. Scalia became St. Jame's 12th pastor, and we look forward to seeing how he will add to our parish's rich legacy.

Our history is one filled with stories of people united and ready to meet the needs of an ever-evolving parish. Through the sacrifices of those that have come before us, we have had the opportunity to worship, gather and learn in a beautiful, welcoming parish.  We invite you to become a part of our tradition: grounded in faith and community, ready to meet the challenges and promises of the 21st century. 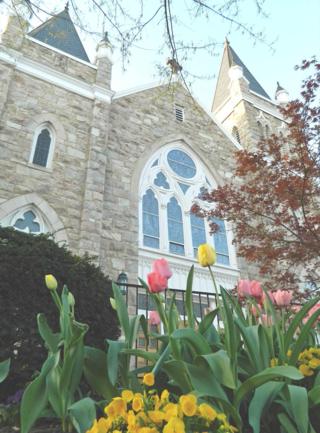 Our history is one filled with stories of people united and ready to meet the needs of an ever-evolving parish. Through the sacrifices of those that have come before us, we have had the opportunity to worship, gather and learn in a beautiful, welcoming parish.